IMRANA Jalal is one of Fiji's highest ranking international civil servants, and certainly the most senior amongst the 23 international financial institutions and multi-lateral development banks. Picture: SUPPLIED

She grew up in a home where gender roles were clearly articulated by her father, Saiyed Abdul Jalal.

An ethnic Pathan Muslim whose ancestors hailed from the former North West Frontier Province, now called Khyber Pakhtunkhwa, in Pakistan, Mr Jalal was a devout Muslim who was essentially “orphaned” at seven years, and educated up to Class 8 only.

And it was because of his “misfortunes” that he insisted his children, particularly his daughters, were educated to the maximum extent possible.

He did not want them to be dependent on any man, and he wanted them to take advantage of the opportunities denied him.

So as a man who demanded much of himself and of others, he was always exhorting his four daughters to do their best. 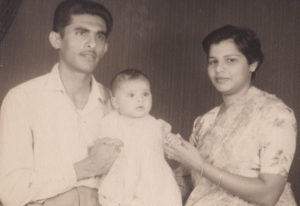 As Imrana explains, she learnt very early in life what her “role” as a female was supposed to be and she was opposed to being treated differently. And as critical and independent thinking set in, battle lines were drawn.

“I think I was feminised when I was six years old,” she said.

“If you grew up a girl in an Indo-Fijian household in the ’60s, and your household was generally gender-typical, then you have an instinctive understanding that you are treated this way because you are a girl.

“You don’t have the same freedom as your male cousins.

“It struck me as deeply unfair even back then.”

Her parents, her father in particular, imposed many constraints on the Jalal sisters. 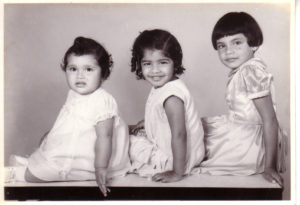 “He was concerned about what other members of our Muslim Indian community would say.

“My father’s izzat (honour) would be questioned if we had the same freedoms automatically enjoyed by my male cousins.

“In the language of feminism, “there were restrictions on our empowerment, voice, mobility and agency.

“These restrictions on our freedoms, and each step forward, had me edging closer and closer to winning the war for gender equality in my own family.”

As a grown up, Imrana loves cooking and a perfect night for her would be preparing dinner for friends and having long debates about politics and life over good wine.

The Jalal sisters were taught to cook by their father, and while his teaching methods were harsh, he imparted a life-long skill she values to this day.

“Our father taught us to cook largely by berating us, and because he has no patience, he expected us to listen once, and learn immediately.

“If we made mistakes, he would say, ‘you stupid girl, I told you to do it this way!’

“He would often give us a slap, when he was teaching us, especially if we made the same mistake twice.

“We were never mollycoddled.

“We were given tasks to do from an early age — cleaning windows at five-years-old, scrubbing the concrete driveway at Nailuva Rd with a hand-brush at eight, and learning to cook “roti-parcels” for our school lunches at nine.

“We were firmly disciplined, got hidings when we did wrong, were punished when we overstepped the mark and feared our father’s wrath.

“But for us, it was just part of growing up in Fiji.

“All our friends got hidings, so it was ‘normal’.

“Some of our hidings are legendary and when we get together we often talk about them with great hilarity.

“However, we had good manners, and had respect for our elders.” 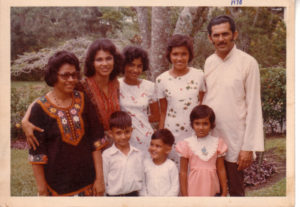 Imrana and her family in 1977. Picture: SUPPLIED

In high school at Saint Joseph’s Secondary, Imrana was a runner, and represented her school in the zone athletics competition every year.

She also participated in the national quiz and debate competitions.

And she believes that going to an all-girls school was the best thing that happened to she and her sisters.

“In mixed classrooms, teachers — whether male or female — give more attention to boys than girls.

“It is just ingrained.

“Patriarchy is served, reinforced and perpetrated everywhere, in schools, in homes, in the kitchen where women continue to facilitate gender-segregated domestic functions, at church, in mosques and temples.

“Women contribute to it by not challenging these social norms.

“If you want to raise achieving daughters, don’t confine them to specific roles and teach your sons and daughters then same values and principles.

“Being unafraid to make mistakes, even if you are laughed at, and being willing to swim against the tide of popular opinion, is an important part of developing survival skills.

Imrana said she and her father fought many battles over “restrictions” but one concession she got as a child was the fact that she was allowed to interact with her limited circle of friends. 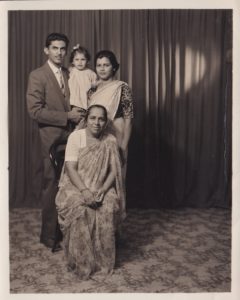 “We had friends from all types of families and races growing up, as Indo-Fijians that was quite unusual in those days.

“We are still really close to this day. Jon Apted named us the “sisthas”.

“Once someone asked me whether the drive to advance and do better existed amongst our close childhood friends and I would have to say that it did.

“We all had strict and driven parents. It was a commonality, which of course we didn’t realise at that time.

“These were also some of the only houses I was allowed to go to for weekends and during the holidays.

“If my father did not know their parents, we simply weren’t allowed to go.

“Amongst us sisters, we also ‘shared our friends’ and to this day those shared friends remain close to all four sisters —Sufi Dean, Julie, Jon and Lisa Apted, Theresa Koroi, Cherie Oyagawa, Natalie Edwards and others.

“Natalie virtually grew up in our household at Wainadoi.

“We also had shared values, all my female friends are feminists, even if they didn’t call themselves that, and believed in gender equality, even when we were growing up.

“I just did not know how to articulate it, or do something about it, until women like Shireen Lateef and Atu’ Emberson-Bain came into my life in the mid-80s, after I graduated.”

My father and I have a very loving and close relationship now and he really “trained” me well for the legal profession with our arguments.

“The art of advocacy on one’s behalf was a good stepping stone.

“We sisters have changed him and he has changed us.”

Imrana is the oldest in her family and her siblings are sisters Joy, Carolyn, Fareen and brother Altaf.